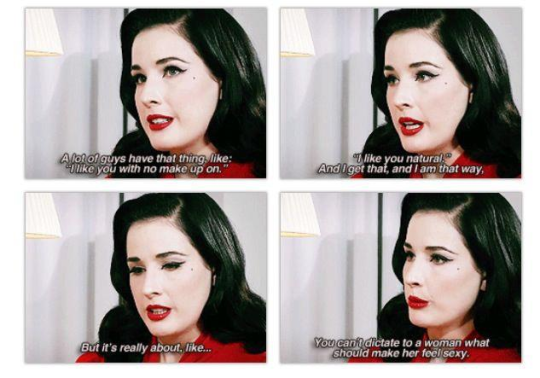 Having a defined self-care routine is very important for maintaining my mental and physical health. It is so easy to forget about yourself and the care that you deserve when you’re working five days a week and running around the city.

It’s also incredibly important to realize that your self-care routine can manifest itself in various ways and those ways do not require explanation. Carrie Bradshaw of Sex in the City liked to stack saltine crackers with strawberry jam while reading Vogue. Jane Austen’s heroines liked to brush their hair with 100 strokes. I like to dress up, put on lipstick and collage.

I think there are my misconceptions when it comes to makeup and womaning. Alicia Keys’ #NoMakeup movement is amazing and liberating. However, it shouldn’t be assumed that this is the only way women find their liberation, but rather how one woman finds hers. Throughout the rise of this movement I’ve seen so many people condemn other women, and you could only imagine the amount of utter bullshit that I’ve heard as a makeup wearer.

“No need to put makeup on what God already put his paintbrush on.”

“No beauty shines better than a good heart.”

Suddenly, what originated as a woman’s liberation came a movement used to condemn and police other women’s bodies. A male celebrity will say he prefers his women with less makeup and a fan will not only stop wearing foundation and mascara, but also patronize those who do. While I absolutely understand the concern that women only wear makeup to cover up what society has called ugly and their natural beauty, if you’re only refraining from wearing makeup because someone has instilled it in your head that it is wrong then you are following another kind of policing.

Wear makeup or don’t wear makeup. That is up to you, but do not think it is ever right to look down upon a woman who chooses something different than you.

2. Miranda Priestly is my Queen

Isn’t it interesting that “vanity” is synonymous with “self-love?” And how “self-love” is so easily mistaken for “self-absorption?” What’s even better is that: if someone else buys you flowers it’s romantic, but if you buy yourself flowers it’s narcissistic. So, what about those who have no significant other? Do they not deserve romance? Are they to deteriorate because their self-care makes you uncomfortable?

Why is there an assumed superficiality affixed to professions like makeup artist or fashion designer? It is assumed that these professions are filled with people who are vain and stuck up. This silly mentality always tried to convince me that if I wasn’t a neurologist I was living my life selfishly and unintelligently.

There’s this magical moment (among others) in The Devil Wears Prada that has always stuck with me. For those of you who haven’t seen it, the protagonist gets a assistant position at an esteemed fashion magazine called Runway: a job she sees as beneath her of course because clothes and makeup are useless and superficial. With the assumption that she’d be able to master the tasks, Andy, is devastated when she realizes the job is not as easy as it looks. Upset and ready to quit, she complains to a colleague, Nigel, about how difficult everything is and how horrible their boss, Miranda Priestly, is to her. What Nigel has to say changes everything for Andy.

Nigel: Andy, be serious. You are not trying. You are whining. What is it that you want me to say to you, huh? Do you want me to say, “Poor you. Miranda’s picking on you. Poor you. Poor Andy”? Hmm? Wake up, six. She’s just doing her job. Don’t you know that you are working at the place that published some of the greatest artists of the century? Halston, Lagerfeld, de la Renta. And what they did, what they created was greater than art because you live your life in it. Well, not you, obviously, but some people. You think this is just a magazine, hmm? This is not just a magazine. This is a shining beacon of hope for… oh, I don’t know… let’s say a young boy growing up in Rhode Island with six brothers pretending to go to soccer practice when he was really going to sewing class and reading Runway under the covers at night with a flashlight. You have no idea how many legends have walked these halls. And what’s worse, you don’t care. Because this place, where so many people would die to work you only deign to work. And you want to know why she doesn’t kiss you on the forehead and give you a gold star on your homework at the end of the day. Wake up, sweetheart.

We need to know the difference between conceited and confident. People should be able to express their self-love in a healthy and harmless way without being condemned by strangers. Let people love themselves without your commentary. Makeup is not superficial for everyone. For some it’s about art and self-care.

My self-care routine is performed every morning: I wash my face, brush my teeth, do a rose facial while the kettle is boiling, make my bed, put on my makeup and wing my eye-liner, make a bowl of oatmeal and choose a colour of lipstick. Every night before bed I moisturize, collage then take a Vitamin D and Zinc tablet.

Perhaps, this is still just a bunch of bull to you. The moral of the story is: Do you, but don’t condemn others for doing them. Your self-care and self-love can look different from others’ and that, my dear, is just fine.

PS. If you need more convincing. Here’s one of the favourite Queens doing their makeup. I used to put it on and get ready to it every morning because the way in which Detox screams “I’m stunning!” while dolling up is always so inspiring to me.