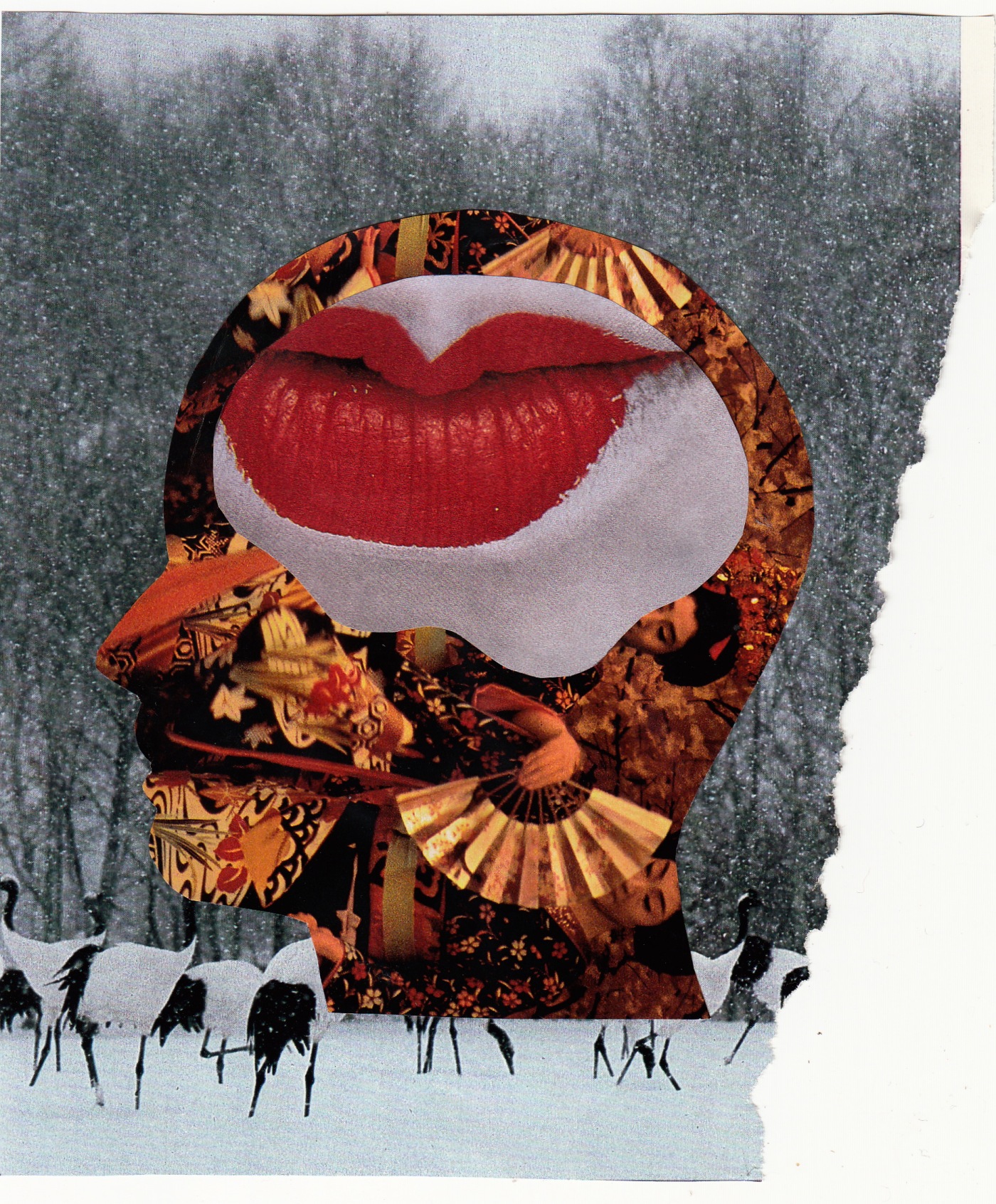 I think it’s about time that I speak about the birth of  Head in the Sky: the collage series that dominates this blog. I think over the years I, myself, have been working through the thematic and purpose of making characters; Their styles and thematic has evolved so much since their creation and I thought it’d be interesting to share with you their back story.

I began the Head in the Sky series in December 2012, with the intention of including another medium in my portfolio, for my audition at OCAD University, in Toronto. I went to an Art High School before post-secondary where I worked mainly with acrylic and watercolour; I dabbled in photography and film, but had enough works of those mediums in my portfolio, instead I wanted something more innovative and different to emphasize to my judges that I was capable of working with variety.

Believe it or not, I was never really a fan of collage before Head in the Sky, because I didn’t think myself to be particularly good at it. And for some reason, I thought if I were to master it my judges would think I was some sort of God and offer me a full-time scholarship and contract position as a associate professor (I’m joking).  It was with this that the Head in the Sky Series was created: it took me some time to create a thematic that I could work with and I played with composition before I made the first character. I really wanted to work with the idea of the human condition and escapism. Once I made one, I realized the character was so small and the composition could be easily reproduced, that it didn’t make sense to make only one. So I made another one, and another, and then I couldn’t stop.

In February of 2013 I drove down to the University with my audition pieces in my car and five HITS characters in a little portfolio. I was instructed to set up my work on a little table and to be prepared to answer questions about each piece. My first judge was a tall, thin man with a greying beard and tan suit jacket; he told me he didn’t know much about any of the mediums I was working with (5 brownie points there) but liked the way my stuff looked and that fact that I could talk endlessly about each piece (5 more brownie points). Before I continue the story, I should tell you that I worked at an art gallery for a year and a half before my audition. There, I met a girl who told me that OCAD was notorious for their good cop/bad cop approach during their assessments– and having remembered that, I assumed that this confused-suit-jacket-man was the good cop. So, I waited. Nervously and impatiently, I waited. I looked at other people’s work, bit my nails, repositioned my pieces and waited; and that’s when I saw him.

Decked out in a bright yellow sweater, clear rimmed glasses, and the shiniest bald head I’ve ever seen, was the bad cop. He was sitting with a girl, staring into her eyesand telling her that her work “wasn’t working.” I smiled so widely, my cheeks hurt, because he was sassy and I had more than enough sass to go around. So when he sat down across from me, I was ready. I began by telling him about my work and the themes I was working with but before I could conclude, he stopped me.

“What’s your story?” Why do you want to go to OCAD?” He asked. And I answered by declaring my admitting my obsession with creation; I even smiled and told him art brings me joy, which is why I pursued art instead of nursing as my mom had wished.

He said, “So, if you aren’t  accepted, your mother will put you into nursing? Then all I have to do is put “No” in this little box and you’ll go home and become a nurse.”

I laughed and said, “No, if you put “no” in that little box I’ll go home and make more art. You, nor my mother, can put a needle in my hand and send me to nursing school.” (15 brownie points)

It was then that he smiled. Well played, I thought. He let me finish, and I concluded my presentation with my Head in the Sky characters. I explained to him how fascinating first impressions are in the way that we tend project our own experiences on the people we see, purely based on what we’re seeing. I told him, each character is naked and clothed by the viewer. Each character is a visually representation of the Id and the Superego: the brain being one’s true self and their rarest desires, and the body being the physical manifestation of society’s requirements.

Once I finished, I held my breath and waited for him to comment.He started by saying that the characters were all the same but unique in their own way, like humans; that they asked incredible questions about gender, classes, social standards the human condition (5 brownie points). That’s all  I needed to hear to consider this a victory, but he continued. It was then that he told me I was the reason he came to work that morning. He told me in my third year at OCAD he’d like for me to take his class in Social Change and that by then I should have at least 3000 characters made (100 browning points).

When he was finished, I got up and packed my stuff and just before he left he said, “I’ll see you next year.”

I met my mother at the car and cried all the way home.

The Head in the Sky Series has evolved so much since then. I’m at the end of my first semester of my third year and haven’t managed to make 3000 characters just yet but I working on it. I also haven’t been able to find the course code for bad cop’s class, but I see him in the hallways all the time. My plan is to find him, find out his name and leave a character in his mailbox.