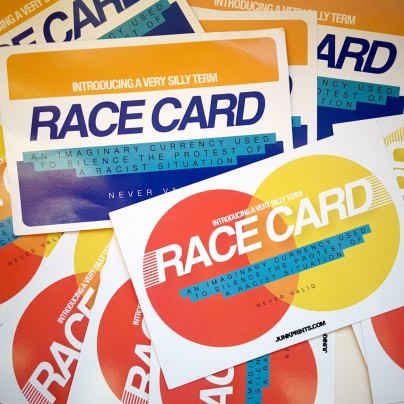 In ninth grade co-ed gym class I was called the N-Word for the first time; and it wasn’t in the way that Kendrick Lamar or Kanye West would say it in one of their songs, it was in the way that told me I was insignificant, unimportant and lower than any other class. Having only heard the word in Dave Chapelle’s comedy skits I didn’t think much of it, until I was called it again in a bus filled with kids on my way to a friend’s house. Now I won’t talk too much about my experiences with the N-Word — because I will in another blog post– but I will say that the smirk on the bus driver’s face during this assault told me that I couldn’t “just forget about race.”

The race card is an idiom that refers to the act of calling someone a racist even if they aren’t just to get away with something. Thus, you can only imagine why I’d find someone labelling my writing as a “blatant application of The Race Card” as a offensive. No one describes the concept of The Race Card better than Chanel Kennebrew who wrote:

“Alrighty! Welcome to America! You may have noticed, particularly if you are a person of colour, that this nation is obsessed with RACE, and using it in some form to divide folks. In fact things have gotten so out of control that seemingly smart people made up terms such as ‘The Race Card.’ It’s a term usually used when one person is pointing out, that due to racism, a particular imbalance or inequality is experienced. The other person who doesn’t want to acknowledge that, then says that the person is simply ‘using the Race Card’…as if it’s a Visa in the back pockets of jeans waiting to be used to pay for a win in a debate. So, me being the vigilante of social justice that I am, have taken the liberty of making and printing these nifty Race Cards, to remind folks how silly that concept is.”

I’ve found that when someone applies the Race Card to my words it’s very similar to being given a social ticket. It acts as a method of silencing me in order to preserve the comfort of dominate cultures, and simultaneously tells me to remain quiet because my oppression is insignificant. I’m in no way shape or form pulling the race card as my goal isn’t to get away with anything or point fingers. My goal is to discuss and critic social constructions of white supremacy and the way in which these structures have affected my life.

Post-Racial  Theory believes that race is a social construction, but it also supports the idea of erasing racial difference as a method of eliminating racism. Basically, Post-Racial Theory can be identified when someone says, “I don’t see you as black,  I see you as a person.” What is incredibly problematic about that comment though is the fact that my blackness is apart of my identity, so by denying my blackness your also denying a part of me. Also, why is it that you have to not see me as black to see me as a person??

“In a “post racial” society, race as an indicator of social status becomes subject to white scrutiny.  White people vocalize elaborate explanations of how they have Black friends and don’t own slaves as a means of denying their participation in a racist system. Black people and oppressed people of colour are expected to silence themselves on matters of racist oppression in America. This social contract of white denial and Black silence creates favourable conditions for the US ruling circle to continue their racist onslaught both here and around the world with impunity.”

I don’t believe in or support Post-Race theory or the concept of The Race Card because I know that my blackness has affected my life and my experiences and I don’t need to prove it to you. By denying the colour of my skin you are blinding yourself to the privileges and disadvantages that come with skin colour.

Evidently, my being type-casted as “the angry black woman” is inevitable, as it’s much easier for privileged individuals to deny my oppression and label it as whiny and/or nonexistent. So accustomed to their luxuries the privileged will always take your fight for equality as being oppressive. Thus, The Race Card is merely a game of silencing to prevent your stories of inequality from making anyone uncomfortable. As long as you remember where you stand and what your goal is no one will ever be able to tell you what you are. So nowadays, when I hear the phrase “angry black woman” it simply sounds like “radical bad bitch.”

The Absurdity of Post-Racial Theory in Racist America http://www.blackagendareport.com/content/absurdity-post-racial-theory-racist-america